We are heartbroken to hear the death of our dearly loved friend and musician Amy Moar who died on 29 February 2016 aged 24.

Amy was a highly gifted composer, harp player and teacher and in only a few short years working with us had become one of the key members of our team to be found at the centre of many of our acclaimed projects and performances, not least our Traditional Scots music ensemble Equilibrium.

Amy’s talent as a musician was matched by her warmth, humour and generosity and to our delight, we discovered Amy was a born communicator on stage too.  The way she could charm the audience both playing and talking about her compositions was natural and effortless.

In 2014, Amy was selected to become one of our first ever Developing Potential Trainees and recently completed her training with two highly successful projects in Angus Special Schools.  We had been looking forward to engaging Amy in further schools work as lead musician when she became seriously ill in December.

Our Artistic Director Pete Sparkes said  “We were so very lucky to work with such a natural musician, her talent and ability to play a wide range of instruments in any style and work sensitively with a wide range of participants was remarkable. Even more than her wonderful talent for music, I will miss her immense charm, enthusiasm and endlessly positive attitude to life and its challenges.”

Thursa Sanderson, our Chief Executive said “Amy will be very sorely missed by all of us at Drake Music Scotland and everyone who met her, worked with her and heard her music.  She is a sad loss to us and Scotland’s music not only as a player, composer and presenter but also because of the huge encouragement she gave to others.”

Amy touched the lives of so many and was also keenly involved in Scottish Love in Action who she had been fundraising for since 2003.

We are extremely grateful to Amy’s family who have very kindly set up a Justgiving In Memory page to Amy at https://www.justgiving.com/teams/AmyMoarLegacyFunds  which will support the work of Drake Music Scotland and Scottish Love in Action.  We are delighted to honour the legacy of someone who gave so much to so many.

Image below: Amy with Rhona Smith, Artistic Director Pete Sparkes and The Proclaimers at our Christmas Gig on 8 December 2015 which Amy hosted. 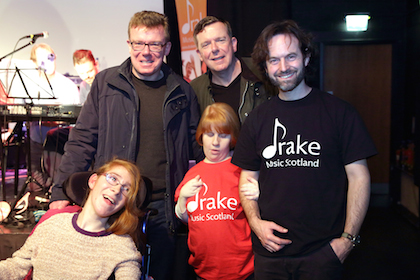