The first of the two concerts, Planetarium took inspiration from Gustav Holst’s Mars from BBC Ten Pieces. Six of Edinburgh’s Special Schools (Oaklands, Redhall, Rowanfield, St. Crispin’s, Pilrig Park and Prospect Bank) transformed the Queen’s Hall into an audible Planetarium with a performance of their own original compositions based on the theme of Space. 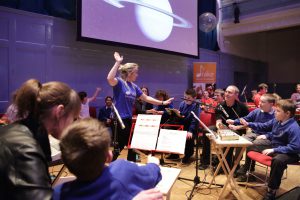 The second concert saw the World Premiere of The Red Planet Suite composed by Lewis Forbes and performed jointly by three of Edinburgh’s Special Schools, Braidburn, Woodlands and Oaklands as well as the Edinburgh Schools Jazz Orchestra. 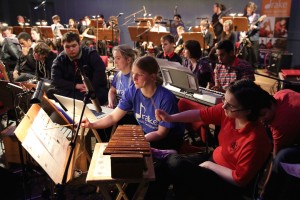 Below Lewis Forbes, Composer talks about how he wrote The Red Planet Suite.

“Writing the Red Planet Suite provided a unique opportunity to bring together several of my main interests as a composer and music educator – new technology, jazz, experimental music and inclusive approaches to music-making – and I was inspired to create a piece that would be engaging and enjoyable for all participants.  The theme of Mars/space was, I felt, ideally suited to the project, and I found that the sounds of synthesizers and effects blended very effectively with the sound world of contemporary jazz.   In the composition I made an effort to include evocative musical imagery which all participants could relate to, and as well as providing opportunities for cross curricular learning (e.g. science, technology…).

The composition was informed by initial discussions to establish the abilities, aptitudes and interests of the four groups involved – three from Edinburgh ASN schools (Braidburn, Kaimes and Woodlands), along with a reduced version of the Edinburgh Schools Jazz Orchestra.  This was an incredibly important part of the process as it generated a very clear structure for the piece and influenced the instruments I used.   As such, the three movements were specifically designed for the the three ASN groups involved, in some cases with parts written for specific individuals.  As a composer, I love working in this way, and as a Drake Associate Musician I feel this will have helped the weekly workshops run smoothly and reduced the need for parts to be altered or adapted.  The three movements ended up with distinct characters and instrumentation – but worked together as a cohesive whole thanks to the thematic links and the ESJO musicians playing in each movement.

I found that the young jazz players were very enthusiastic, open-minded and inquisitive (about the technology and musical ideas).  Being very switched on to trends in jazz and contemporary music, they demonstrated real understanding of the music and its influences, and worked hard to perform the piece with energy and authenticity.  The rhythm section in particular played a vital role in helping the whole ensemble of 50+ players work together effectively.  Through the composition process I was very aware of trying to create sections where the the ASN pupils and the mainstream jazz players could work truly collaboratively.  This included, for example, question and answer solos between Skoog and trombone, and moments when ESJO had to follow cues from the ASN pupils.

The first movement, “Orbit [Loops]” (Braidburn School), made significant use of music technology, and drew on the sounds of science-fiction.  Soundbeam, Switches, Skoog and other controllers were combined in ways which were, I felt, quite innovative.  This included switches triggering arpeggios and layered sounds, and beams used to create a swooping theremin-type effect.  The second movement, “Surface Rock” (Woodlands School) was written for rock instruments, adapted with the Figurenotes system.  The pupils from Woodlands seemed to really enjoy the music and their individual parts, and performed on the night with dynamism and a real feel for the groove.  The third movement, “Moonssong” (Kaimes School), incorporated voices – spoken and sung – as well as tuned percussion, and they also performed with great enthusiasm for an impressive finale.”