Equilibrium was formed in 2014 in response to demand from disabled musicians looking for more opportunities to write and perform music that identifies with traditional Scots music using acoustic instruments such as the harp and fiddle alongside new digital instruments that can be played by musicians with limited mobility.

In February 2016, we were extremely saddened by the death of Amy Moar, a talented musician, composer and graduate of our Developing Potential programme to become one of our Associate Musicians leading the delivery of our school education projects. Amy’s death was also a blow to her fellow members of Equilibrium who have agreed to continue performing as a group and to keep her memory alive through performances of her music.

“The most innovative music show so far….the skill, inspiration and artistry that made this performance so enjoyable took my breath away.” ***** star review by Louise Rodgers, TW 27 August 2016 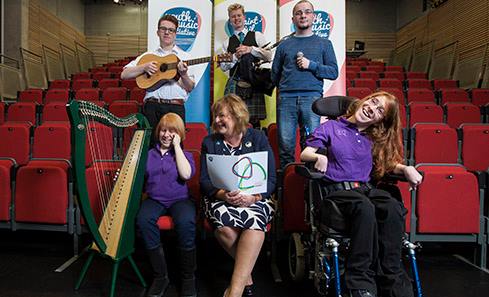