Matthew Goode absolutely loves music of all kinds and has been working with Paul Binning at Drake Music Scotland for 2 years. Matthew has severe disabilities, he has cerebral palsy and is cortically blind so co-ordinating his limbs to move in the way he wants is a daily challenge.   He has been making music at Drake using the sound beam and switches which he presses for different instruments (linked to computer) using his head or hand. It has been the most wonderful experience as his parents to see how his musical composition and playing has developed. Working with Drake Music Scotland has been the most independent activity that Matthew has ever taken part in. Now living at home fulltime, his weekly sessions at Drake are one of the key highlights of his week and he travels up from the borders to Edinburgh specially.

Age 19 Matthew left the Royal Blind School in June this year, and we his parents arranged a music festival to raise funds for a hydro pool and to celebrate Matthew’s achievement in music. He played live on stage for the first time in front of about 200 people – no pressure! Performing his 2nd ten minute track with Ali from Drake on electric bass, it was awesome and everyone was amazed to see Matthew playing piano on sound beam by moving his head, alternating with a snare drum on delay using a head switch. The track was more than cool!   It was very emotional to see how far he has come through his music.

Assisted by Paul, he has now made 2 tracks, and we think they should be the beginning of an album, many who’ve heard his music, really like it. It has some commercial appeal.   Last April we visited the Naidex Exhibition in Birmingham and met Tom Yendell from Unique Arts. He told us about their competition, and I thought “oh I wonder if I could enter Matthew’s Drake track?”. So the 1st track he and Paul created together was entered and we waited patiently to find out what would happen.   The Unique Arts Awards were running their first ever competition – having been set up by the MFPA Trust fund which supports children and young people in the arts. We were thrilled to discover that Matthew had been chosen as one of the finalists, of which only 3 were in the Youth music category.

So we were invited down to London, Kensington to a hotel for the awards dinner and ceremony. I think we may well have been the only people to travel from as far as Scotland! Matthew wore his kilt in honour of the occasion and his music was played during the dinner. Matthew won the bronze award.

Thank you Paul and Drake Music Scotland for enabling our son to become such a cool musician. We are so excited by the work he is doing with you!

Photo: Matthew with his parents at the Awards 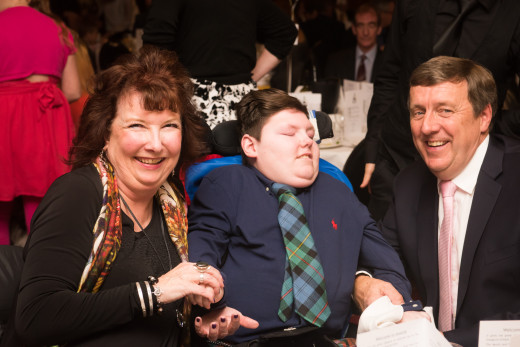