My name is Fiona Sharp, and I am an Associate Musician at Drake Music Scotland. 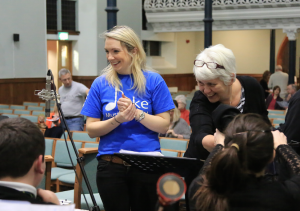 The first term was focused on the music notation system, Figurenotes, teaching the pupils how to read, compose and play Figurenotes on the chime bars, keyboard and guitar, as well as playing together as a group, and at times, pupils taking the lead and conducting their peers in a group setting. There was also an opportunity for the pupils to learn how to play the Skoog and the Soundbeam, exploring the various sounds that the instruments produced.

In the second term, Composer and Associate Musician Matilda Brown, was commissioned to write a three movement piece, ‘So Much Depends Upon…’ to be performed by the high school pupils involved in the project, accompanied by the Montrose Academy Baroque Ensemble.  This was a good experience for the high school pupils to commit to attending regular rehearsals and developing an understanding and appreciation of working towards a performance.

The piece itself was a collection of concepts explored by the pupils at the start of the project. As Angus is a rural, farming region, farm life was a big topic, and many discussions were had about tractors, farm animals and farmers. Using these ideas, Matilda shaped her piece around farm life, the title: ‘So Much depends Upon…’ derived from the poem written by William Carlos Williams.

The pupils were given a selection of notes and asked to write a four note melodic sequence. Three of the melodic phrases are used throughout the piece, both played by the pupils and the ensemble. Different sounds were chosen using the Soundbeam switches and the Skoog to depict what was happening in each movement, for example, the first movement (Morning) uses sounds of birds, a cat purring, and a cockerel. The second movement (Afternoon) is telling the story of a farmer driving his tractor and eating a packet of crisps. The final movement (Evening), has night birds setting the scene and then gradually bringing back the various sounds and melodic phrases from the previous movements 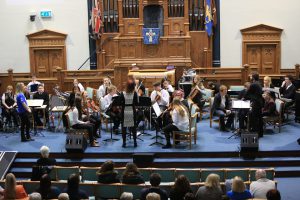 The concert was held at St Andrews Church in Arbroath on Wednesday 26th November 2014. This was a fantastic opportunity and experience for the pupils involved in the project. What was more impressive was the level of concentration that each pupil showed, as well as developing patience, listening skills, eye contact and controlling nerves and anxiety. The concert was a huge success with very positive feedback from Angus council, teachers and parents. One pupil at the end of the concert said to me, “Wow, I’m now famous!”. Jerry Randalls from Angus council said, “I’m speechless, that was absolutely fantastic.” A pupil’s mum told me how much her daughter enjoyed the whole experience of the project. Each week the pupil would go home and tell her mum about the different instruments she had learned to play and what sounds we were using in the piece, as well as telling her the various stringed instruments in ensemble that she would be playing along side at the concert. 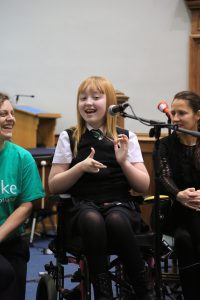 The project not only allowed for inclusion within the mainstream school instrumental departments and Support for Learning Bases in Angus schools, but it also opened up huge opportunities for the pupils with additional needs to experience the rehearsal procedure, building up to performing at a concert in a venue to a large audience, as well as learning to play new instruments, and helping with the ideas, creativity and writing of the music they would be performing. Overall the project has made a huge positive impact on all pupils involved, as there is an evident sense of achievement, pride and growth in confidence. 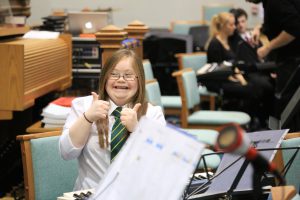