Lauren Shaw from Pilrig Park School visited Drake Music Scotland from the 24th – 28th April 2017. Below is her blog about the week.

I arrived for day one of my work experience placement at Drake Music Scotland this morning with my transitions worker Stacey. I was really happy about going on placement with Drake Music because I love to play violin but I was feeling quite nervous.
When I arrived I was given a tour by Emma, and introduced to the other members of staff in the office. The first task of the day was to work with Lauren and learn more about Figurenotes. I was given a Figurenotes violin to try and found it really easy to use. 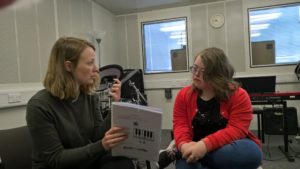 I also practised playing pizzicato and although I’ve never done this before, I picked it up really quickly! I don’t feel nervous anymore, and I am excited about what other new things I will learn during this placement! 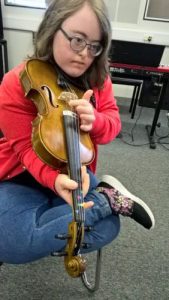 After lunch I joined the Varifocals in the studio to watch them rehearse for their upcoming gig. The Varifocals are: Frank, Georgia, George and Lesley. They were amazing and I loved watching them play. They played a mixture of songs that I knew as well as their own original songs and they played like rockstars!

I spent the morning writing about my experience working with Drake Music in the run up to the Jazz Jigsaw concert at The Queen’s Hall and what it was like to play on the stage in front of so many people.

In the afternoon I went along to the studio to watch the Screaming Rainbows, who are a figurenotes pop band. I was so excited to see them because I love pop music. They were playing a new song and needed a singer so I volunteered and had an amazing time singing Let Me Go by Gary Barlow with the band! 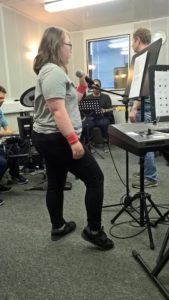 Afterwards, I joined the Digital Orchestra with Ali and Pete. Again, I was able to get involved and I played the keyboard alongside the others. It was a really cool experience and I enjoyed listening to all the different sounds and seeing everyone’s parts coming together. They sounded amazing!

This morning I got to test a new app that lets you learn figurenotes whilst you play different tunes. I got the hang of this quite quickly and really enjoyed using it. I wrote some feedback about the app and then moved on to learning how to use the figurenotes software for writing music. I wrote two songs that I could learn with my violin.
Being at work experience with Drake Music Scotland means I am surrounded by musical instruments, and today I got to try out the drums! Rick helped me set up my phone to the speakers and I played along to Queen and Nirvana. I had a great time and I would love to play more drums in the future! 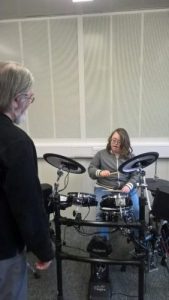 In the afternoon I worked with a familiar face from Drake Music called Chris, who I worked with before for the Jazz Jigsaw project. He was working with a band who don’t have a name yet, and I joined their session and played some violin with them.

This morning I joined the figurenotes ceilidh band for their session. They were practising for their upcoming gig in May. They invited me to sing with them and we sang one of my favourite songs Sunshine on Leith by The Proclaimers. In the afternoon I watched the Digital Orchestra. I’ve had an amazing week and I’ve learnt so much about the work that Drake Music Scotland. It’s been fun!

Lauren also took part in our recent performance of “Jazz Jigsaw” at The Queen’s Hall in Edinburgh alongside her other school friends fro Pilrig Park, and Braiburn School and the Edinburgh Schools Jazz Orchestra. Here are a few of her thoughts from that project. 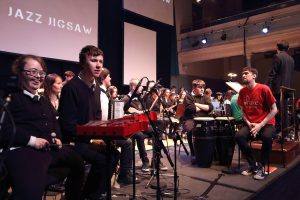 I took part in the Jazz Jigsaw project earlier this year. Chris came into school and taught me and my class mates how to play the xylophone and keyboard using figurenotes. We prepared for the concert by learning songs like ‘Ally Bally Bee’, ‘Oom-Pah-Pah’ from Oliver! The Musical and ‘Make my Heart Fly’ from Sunshine on Leith.

I kept practising with Chris every week before our big concert at The Queen’s Hall. On the day of the performance I was shaking I was so nervous! Before the audience came in, we had a stage rehearsal which made me feel a bit calmer about performing.

When I went on the stage I was amazed at how many people were there! I knew my mum, cousin and godmother were there to watch me perform too. As soon as the music began I started to play just as I had practised with Chris! It makes me so happy to play music that my nerves disappeared completely, and I had fun up on the stage.

I thought that the other schools and the ESJO jazz band were amazing and I enjoyed listening to them play. The whole experience was fantastic and I felt proud when everyone clapped for us at the end of our performance. My mum and cousin were so proud of me they gave me chocolates and flowers to celebrate!

I had the best time playing as part of the Jazz Jigsaw, it was an experience that I will never forget and I would jump at the chance to do it all over again! 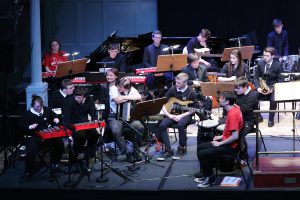