From October 5th to October 9th, I went to Drake Music Scotland for my work experience. This is what I did:

On the first day, Monday, I was introduced to some of the staff at Drake Music Scotland, and I was then given a tour around the rooms. I became very happy when I discovered that there was a studio. After the tour, a computer was set up for me, and I then used this computer to complete several different tasks in an office. The office work gave me a good insight into what goes on at Drake Music Scotland.

On Tuesday, I spent the day listening to and observing bands in the studio. I got to see Liveheart, which was led by Lesley and Steve, and the Screaming Rainbows, which was led by Robin. Throughout the day, I carefully watched how the staff interacted with the members of the bands, and it was amazing to see that everyone was playing music at a high level, despite having a disability. The band experience lasted for most of the day, and after the band experience, I watched the Digital Ensemble, which was led by Pete and Ali. At the Digital Ensemble, I helped to create some music to support a piano piece. 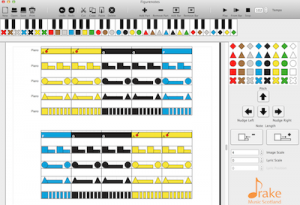 On Wednesday, I was introduced to Figurenotes, and I then recreated three popular songs on the computer using Figurenotes and GarageBand. After I recreated the songs, I composed three riffs. It was nice to hear what I had created when I pressed the play button, and this was my most enjoyable day of the week. 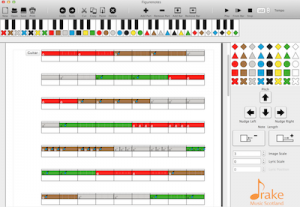 On Friday, my last day at Drake Music Scotland, I wrote up my blog on the computer and I finished any tasks that I didn’t manage to complete. I also watched a “Pop” band in the afternoon, which was led by Pete. After that, my work experience was over.

Overall, I really enjoyed my week of work experience. I now know a lot more about Drake Music Scotland and how much they have helped people to learn music. They have been changing people’s lives since they became a separate charitable organisation from the Drake Research Project in 1997, and they have worked with about 7000 children and adults in Scotland as of now. They have several different ways to help people learn and play music, such as Figurenotes and Brainfingers. These ways are very effective and very successful. Also, the people who work at Drake Music Scotland are extremely experienced at communicating and interacting with people who have disabilities.

Nobody should be left out or excluded because of a disability, and Drake music Scotland is proving that anyone can learn to play music, regardless of what they can or can’t do. They are setting an example to others, and if more charities step forward, more people can be helped.

If someone ever tells you that you can’t do something, prove them wrong.